I fell in love with my daughter again last night.  I was already fascinated, proud, enamored and amazed that this little girl with the button nose and hair curling above her ears is mine, but last night it all hit me again and I wanted to write it down so I can remember it later in life (because I'll be quite honest, my memory doesn't last very long! 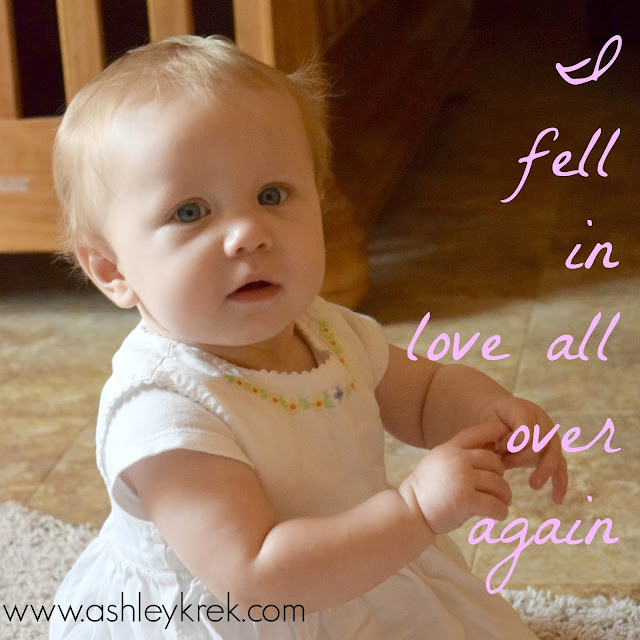 To start the day we had an early morning, as Bonnie Ann apparently decided that four am was an appropriate wake-up time for a Monday (note: it's not).

I got some work hours in, but after those were done we spent our day cuddling, having a dance party to Zac Brown Band, splashing in the bathtub, reading our new collection of French books and just playing.  It was one of those perfect inside fall days that was just a bit too chilly and windy to spend a lot of time outside (and anyway, there was some crazy construction going on and it was loud!) so it was a mom/daughter day indoors.

After her afternoon nap, though, Bonnie Ann didn't seem to be up for a lot of playing or dancing.  I think the early wake up and day of play wore her out!  She was rubbing her eyes and just a bit more mellow than normal, so when I put her in her crib at night I thought for sure she would be asleep by the time I got downstairs.  That didn't end up happening, but I'm grateful that it didn't, because if she had fallen asleep on that first attempt I would have missed the time in between that and the second attempt.

That time between the first and second?  To me, it was magic.

I went upstairs to check on her, and sure enough her nook had been thrown on the ground (this is her way of telling us that it is not in fact time for her to be in bed.  I gave it back to her and she immediately started screaming, so I picked her up and she went silent.  We rocked on the rocking chair in her room for a couple minutes, and when I went to put her back in her crib she was crying before we even got to it.

Clearly it wasn't time to say goodnight quite yet, so we came downstairs.  The only place she would be calm was lying on top of me and cuddling my neck.  What else could I do but just lie back on the couch and relax with this little girl who wanted nothing more than to just be with me?  Knowing that I could calm her and that me just being there was the solution to her problem - that was magic.

I fell in love with my daughter all over again last night, all because she wouldn't sleep.  The next time she's refusing bedtime I hope to remember this night and open myself up to the possibility that her not sleeping might turn out to be the biggest blessing of my day.

It truly is these small moments as a parent that are the most important, and I am going to try and write more of them down so that as she grows up I can remember how I felt and what she did that made me smile through the years.  That seems pretty darn important.

What were you blessed with yesterday?

Posted by Unknown at 6:00 AM
Labels: Bonnie Ann, Family, Memories