It absolutely blows my mind to know that Bonnie Ann turned seven months old on Sunday.  Where did all this time go and how can I get it back? 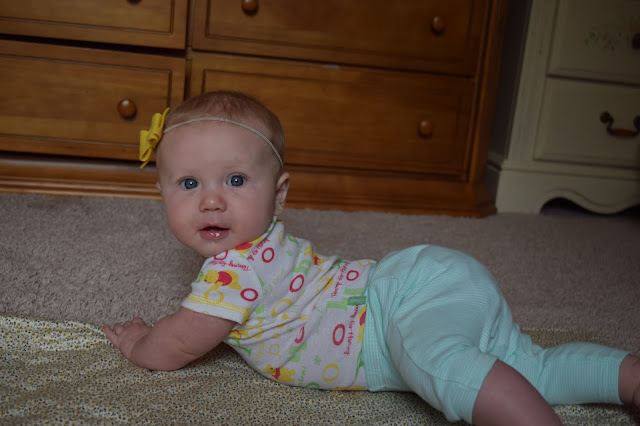 This past month has been a very fun one for Bonnie and for us.  She is learning new things all the time and it is such a blessing to get to spend my days with her.  Jake stays home with her one day a week as well, so I can go into the office, and I know he loves these days of cuddles and naps on the couch. 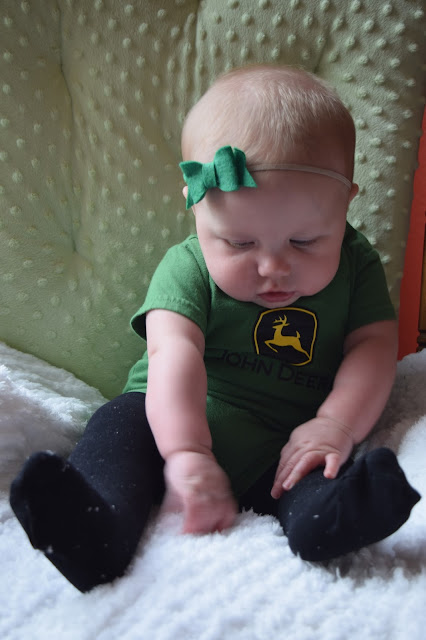 During the last month Bonnie has become an absolute pro at sitting up by herself.  She of course can't get herself to a seated position yet, but when you position her she will move around and keep her balance for the longest time.  She will sometimes get a bit too wobbly and fall backwards or to the side, but that is pretty few and far between now.

Naps have turned into an everyday occurrence and let me say, I am happy with this development!  She will normally wake up anytime between 6 and 8 and then take a 2 hour nap around 10 am.  She'll then be up until 5 or so, and will then take a quick half hour or hour-long nap.  Bedtime is normally between 8 and 9, and then the cycle begins again the next day!

She has had the two front bottom teeth for a while, and just recently a third tooth has made an appearance.  It is one of the top teeth, but not center - one that's right to the side of center.  So I suspect that there will be a couple teeth that come in quick succession here shortly. 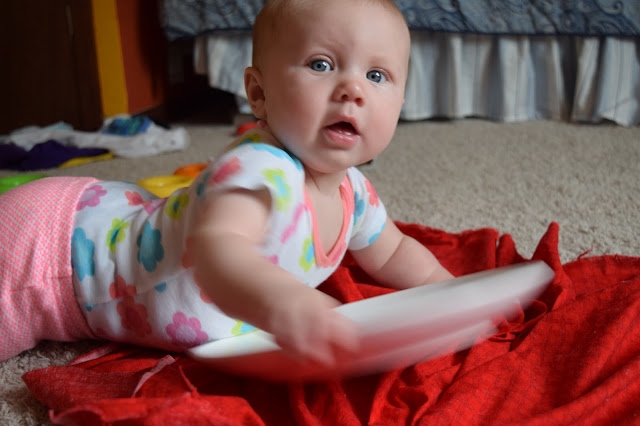 Bonnie hasn't yet started crawling, but she can definitely get wherever she wants to go.  If you have her on the floor she will be on the other side of the room before you have a chance to blink.  Along with that, she has become very adept at spinning herself around while she's on her tummy.  If there is something that she wants to get to, she'll get there!  We feel like crawling will begin soon - I'm not sure we're ready for that yet though!!  We did put up a play pen in the living room just for when we have to take bathroom breaks or switch laundry out.  She's such a fast mover that it's nice to just have the peace of mind that she can't get into anything while we're gone! 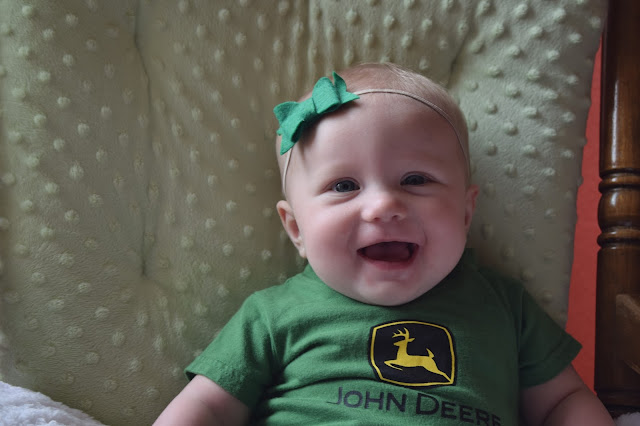 She still enjoys blowing bubbles, scratching faces and cuddling.  Some of her new favorite things today are JUMP in her jumper - there's no slowing this lady down when she gets going!  She also does the funniest hand movements.  She'll be holding her nook and a toy (or not holding anything) and she just rolls her wrists.  I don't know why she does it but she loves to!

She and dad love giving each other high fives and she knows exactly how to do them!  She's happiest in the morning and she will greet you with the biggest smile and a bit of a Superman dance because she waves her arms and legs and balances on her belly. It's one of the things Jake and I love to see the most! 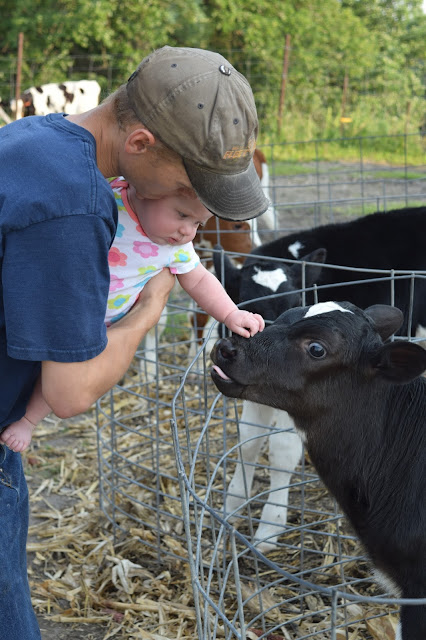 Cloth diapering is still going well, but we did start having her sleep in disposables.  They seem to be a bit more absorbent for the longer stretch of time - she loves her beauty sleep!  We'll still sometimes have a bit of a leaking issue, but it's not too bad.  I think part of the problem is that she always sleeps on her belly - the fronts of those diapers just don't have as much to them as the backs!

She got to visit with dad's cows for the first time and she was SO interested in them.  She wanted to pet them and just kept looking around at all of them.  One in particular became her friend, and the sight of her and her dad just melted my heart!

She is still in 6 month clothes, and some of the larger 3 months still fit, but those will soon be packed up because they're getting a bit snug.

Seven months - I can't believe it!  I am excited to see what the next month has in store for us!

Posted by Unknown at 6:00 AM
Labels: Bonnie Ann, Family