Six months - that's half a year.  Half a year?!  Trying to wrap my head around the fact that Bonnie is already six months old is an impossible feat.  But, in the same breath I could also say quite truthfully that I can't imagine life without her in it.  Just this morning Jake and I were talking about life before Bonnie and it's crazy to think back to those days.  Seriously, what did we do with all our time??  I can't imagine having nights and weekends without a little one to take care of - life changes quickly! 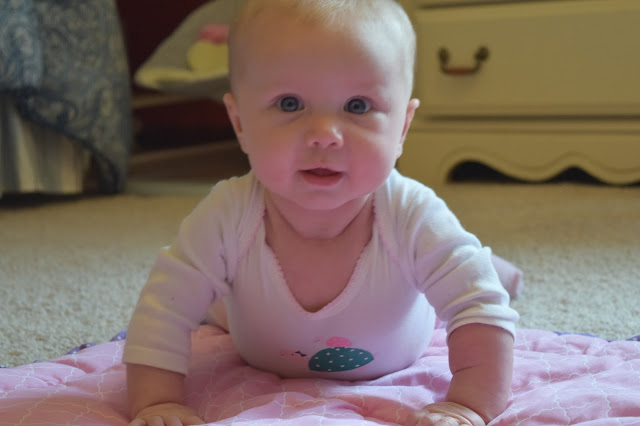 The last month Bonnie has grown and changed so much it's hard to believe.  She is an absolute master of rolling over and no matter how you set her down, she will roll over so she's in the opposite position!

Along with rolling over, she is just starting to learn how to sit up on her own.  She's still pretty wobbly with it, and I'm not entirely sure that she understands what is going on when she is sitting, but she's starting to get it down!  I'm not sure if the extra padding of the cloth diapers makes it easier or more difficult for her to learn this - but either way, she's doing it! 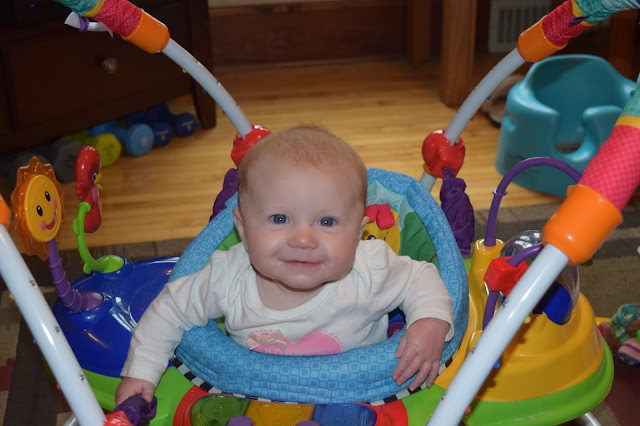 One of her new favorite pastimes is blowing bubbles.  She will entertain herself for the longest time by blowing bubbles and if you do it back to her she thinks it is the funniest thing ever!

This past month we have finally been able to get her to take a couple naps.  They normally happen every other day or so, and last around 2 hours.  So far I have had more success than Jake has, but she and Jake are pretty great couch nappers so I think that makes a second nap more difficult for her :) 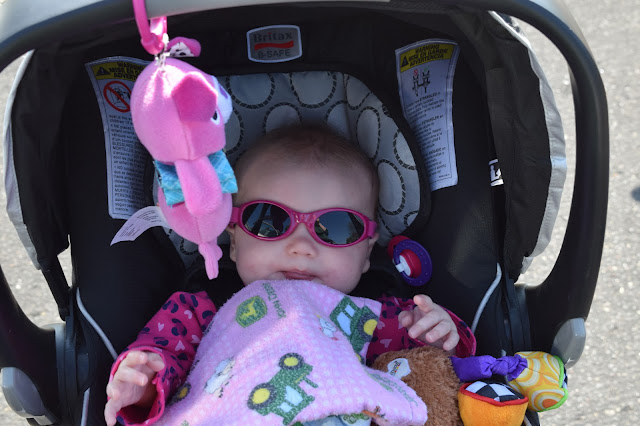 People have started to ask if she's been scooting around yet, and I am totally fine with saying no!  I'm not nearly ready for a mobile baby - my little rolling baby is perfect just how she is!  If anything, Bonnie has actually started to scoot herself backwards.  She will sometimes get her heels dug in and when she pushes off she'll be a couple inches further back than she had been.  Again, I think she has no idea that she's doing it - but it sure it cute to watch!

Cloth diapering is still going great, and we both love being able to hang the diapers out rather than hang them in the basement.  Personally, I think seeing all the diapers out our kitchen window is one of the cutest things ever!

Bonnie has officially grown out of 3 month clothes, and is now in 3-6 and 6 month outfits.  The 6-9 are still big on her, so we haven't jumped into those yet.  It's pretty incredible how many clothes she goes through.  She has a much better and larger wardrobe than either Jake or I do, and she can only wear most of them for a month or two!

Bonnie is still hanging out with her two bottom front teeth, she's an awesome night-time sleeper and has decided that anyone who has an apple must immediately let her lick it.  Typical baby behavior, I suppose!

That is Bonnie Ann at six months in a nutshell!  I have no doubt that before I know it I will be posting a month seven update, but for now I'm going to go cuddle that little lady and tell her to stop growing so quickly!