Week five of Body Beast is done and I feel great!!! 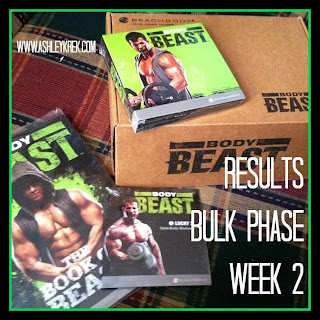 I kind of always thought that I would like this workout, but after finding out that Bonnie Ann was going to be arriving, I put Body Beast on hold - but now that she is here and I am doing the program I love every second of it!  I love love love the feeling of knowing that I am building up muscles and shredding through some fat reserves - Body Beast is leaning me out and I loooove it.

It has definitely taken some adjustment to get used to seeing the scale not drop drastically.  While it has gone down, it honestly hasn't dropped by much, which can often be a very frustrating thing to see.  While the scale hasn't been changing, though, my measurements are shrinking!

This is proof positive to me that I am getting rid of fat and replacing it with muscle (a pound of muscle takes up less space in your body than a pound of fat does.  So, while they weight the same, replacing fat with muscle makes your measurements decrease!)

Week 5 of the program (week 2 of the Bulk Phase) was a great week for me!  I really got my nutrition dialed in better, though of course this is something I will always be working on improving!  I did notice that I was getting much more tired than I have recently been, so my nights often were earlier nights than I might have normally done - but that's okay!  With waking up at 5 or earlier to get my workout in, I definitely want to make sure I get enough sleep so I am rested and able to kick butt.

My goals for the next week of Body Beast are as follows:

- 110 ounces (at least) of water every.single.day - no exceptions!
- Lose at least one pound OR at least 2 inches.
- Complete every workout on the day it is assigned.

Those are my goals for next week - I will check in and let you know how I've done with that!  For now, though, I think it's time for some results!  The beginning measurements are just from the beginning of the Bulk Phase, so the differences listed below are from just 2 weeks! 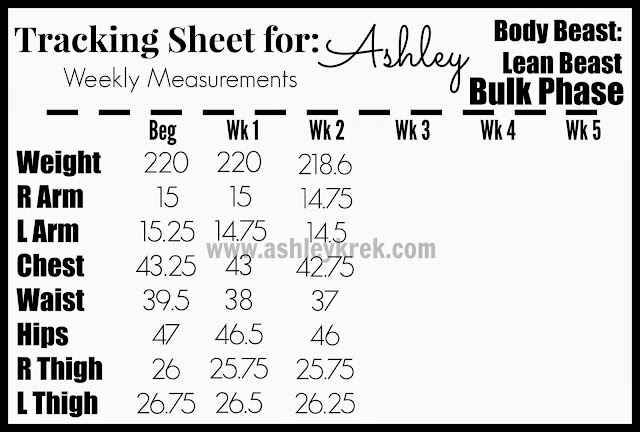 I have said it before and I will say it again - I am pretty darn proud of these numbers!  They show that I am showing up, doing the work and getting the results to show for it - and who doesn't want that?!?