Week 37!!!  Each week when I write these, I wonder how many more times I will have a bump update - pretty soon there will be a baby to post about (and I absolutely cannot wait for that day!)  But for now I must be content with seeing the weeks go by as baby continues to grow!

This past week has been, in one word, awesome!  For the past couple months whenever people have asked when I think the baby will be arriving, I've said "as long as he or she stays put until November 7th, I'm happy!"  Of course if he or she made an early, healthy arrival I still would've been happy, but selfishly I was hoping for November 6th or later.  Why?  I'll get there in a second :)

On Saturday night Jake and I hosted his mom, niece and nephew and sister for dinner.  It was a semi-last-minute type of thing but it was a lot of fun!  Jake grilled burgers (from a steer born & raised on his farm - proud wife right here!) and we had some other fixings to go along with it.  Nothing earth-shattering or exciting, but tasty all the same.

Sunday I met up with my parents in St Paul and we had a parent/Ashley date - dinner at a hotel followed by seeing James Taylor in concert.  My dad has been a fan of James Taylor for longer than I can even remember but had never seen him in concert; when I saw he was coming I made my dad set the evening aside so I could bring him as an early Christmas present.  The three of us stayed at the hotel that night so I didn't have to drive the hour home in the dark and I got up in the morning and went in to work.  It was so much fun and a really relaxing evening out!  The baby did get a bit of a workout, though.  I could feel him or her jumping around the whole time!

Monday afternoon was supposed to be my first weekly OB appointment, but my doctor had to deliver a baby so I re-scheduled for Tuesday.  That was perfectly fine by me because I know if my baby is coming in the middle of his work day he'll be there for me, too!  On Tuesday I told the doctor that Jake and I have a feeling we will have a December baby (with a due date of November 29th it's not too crazy to think I'll go two days over).  After he checked me, though, he let us know that he wouldn't put his money on a December delivery.  At 2cm dilated and 80% effaced my body is already getting prepped for this baby to come!  Now of course nothing is for sure and I could stay like this and still end up going two weeks over, but he is guessing that probably won't happen.  Time will tell!!

Then Thursday happened.  Thursday was November 6th (the one I mentioned earlier in the post).  The Thursday I was waiting for and hoping baby would stay in for.  On Thursday I got to see one of my all-time favorite artists in concert - Garth Brooks!!!  For as long as I can remember my sister an I have talked about wanting to see Garth; a couple months ago he announced he'd be playing in Minneapolis (this quickly turned into ELEVEN shows!!!).  We (along with my cousin & grandma) got tickets to the opening show and it was absolutely everything I thought it might be - high-energy and just all-around incredible.  I spent most of the concert on my feet screaming and singing my lungs out.  I'm so grateful I got to go!

The rest of the week was a bit more low-key and I was perfectly okay with that.  After all that excitement I think baby and I both needed a bit of a break.  People have been asking if I've been feeling any contractions yet and I can honestly say that I have no idea.  I haven't felt any timeable or consistent things that I would say are contractions, but it's entirely possible that some of the twinges and semi-painful moments I have are actually contractions and I just don't know what they feel like.  Hopefully when the time comes I'll know it and won't have to second-guess myself!  Who knows...maybe that time will be this week?  I'm still placing my bets on a December baby, though it's much more tentative than it used to be.  Time will tell! 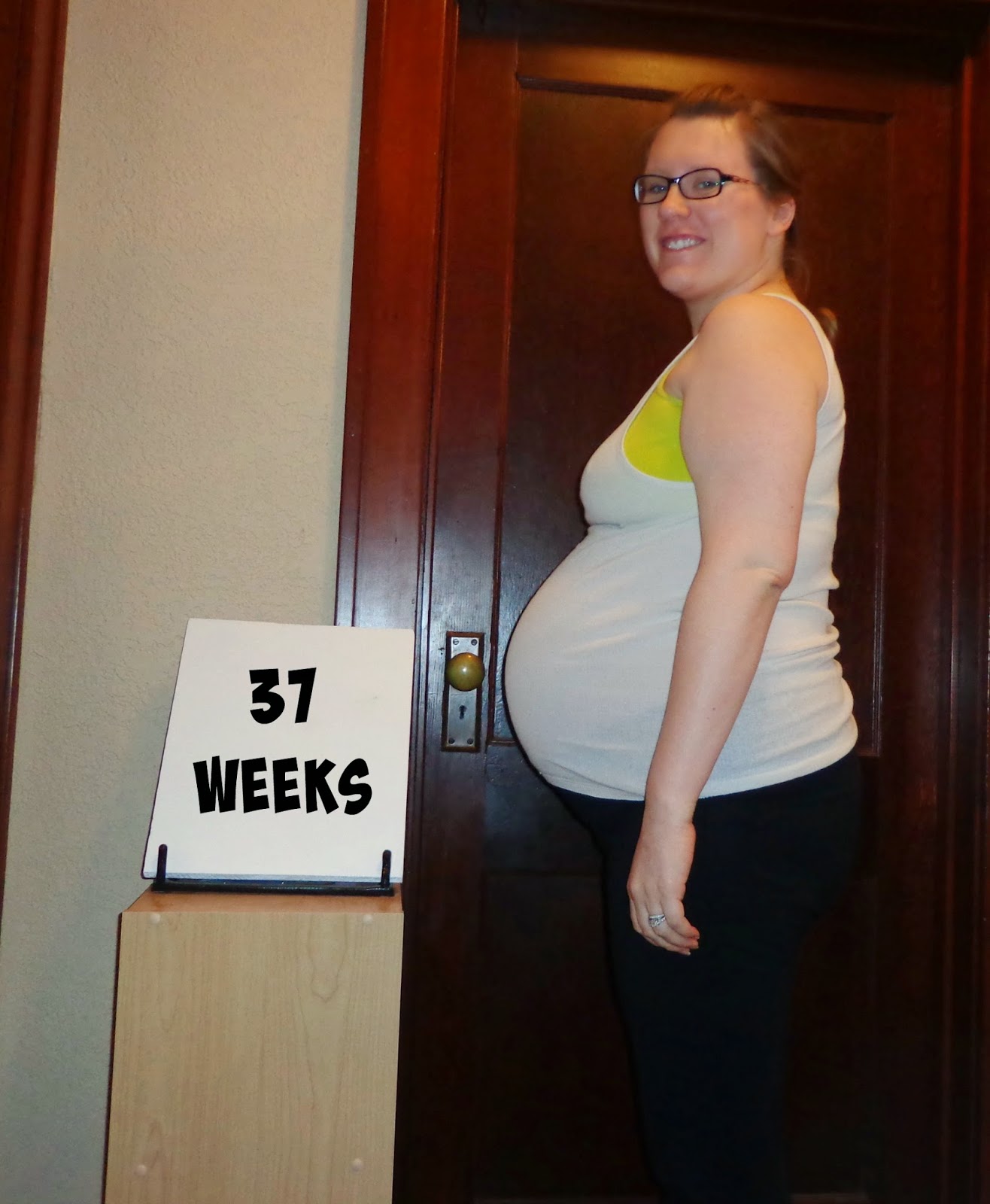 When I took this picture and looked at it, I couldn't help but think that my belly looks different than it did last week.  Of course it's a bit bigger but the whole shape and position is different!  I've posted a comparison shot below.  What do you think?  Is this what they mean when they talk about 'dropping'? 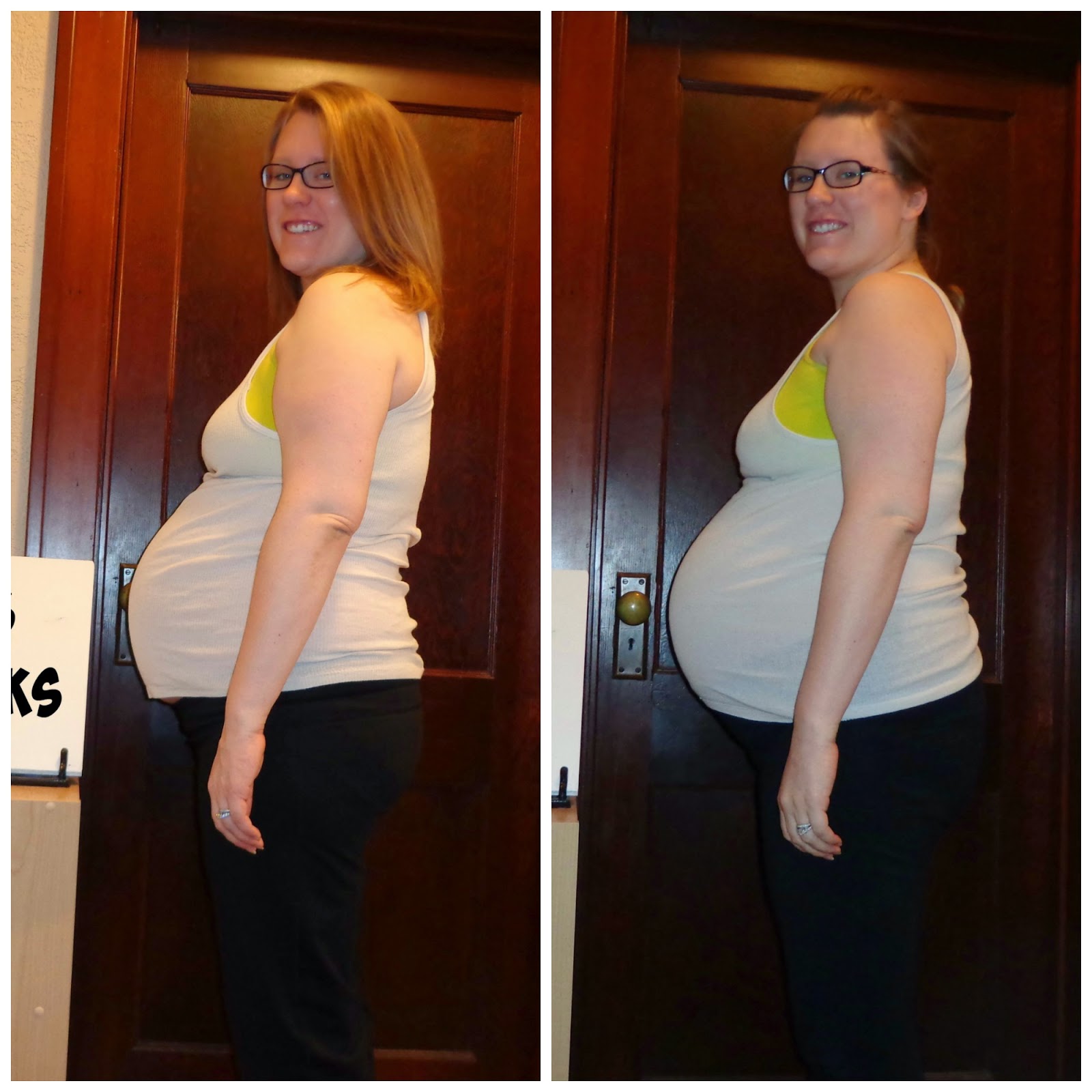 I recently heard Garth Brook's new song about mom's, and I was BALLING. I can only imagine how it would be to hear as a mom, and as a pregnant mom at that. I bet he was great!