It's true, I have failed yet again at keeping my bump dates updated on time.  The third trimester has me absolutely exhausted every. single. day.  It is about everything I can do to even get to work for a full day - once I get home I honestly think I could fall asleep for the night.  Most days I manage without a nap, but I'd be lying if I said those hours between work and bedtime were full of super productive things.  Every day I feel more blessed by how incredible my husband is - he has no problem coming home and doing the house stuff and cooking I normally would do.  I suppose it is partly his fault I'm so tired so it's the least he can do, right?  ;)

The least I can do is write down what's happened these last couple weeks!  During week 28 Jake and I got our registries done - and as much fun as it was, it was also pretty darn stressful at the same time!  Although in a lot of ways it's similar to doing a wedding regsitry, doing a baby registry is putting together a list for a person you've never met before.  We have no idea what things the nugget will like and hate, so trying to pick out items wasn't as easy as I would have expected.  But we got it done and I am so excited to get the nursery all put together!  I think that will really make this all seem real (as if my growing belly hasn't really made it all sink in yet.)
I entered into 28 weeks at my family's annual Family & Friends Camping weekend.  We rent out three campsites and the whole crew comes out for a weekend of lounging by the fire, going on walks, playing golf on Saturday morning (I opted out this year and instead went to the park with the kiddos, my mom and former neighbor) and just having fun being together.  Normally I would have gone up on Friday night, but after a long couple days at work I just couldn't bring myself to make the drive that same night.  Jake had to work that weekend but was on days, so instead of going up Friday night we had a low-key night at home and I drove up in the morning.  It was a great weekend - it's crazy to think that next year I will have a family of three there!
This past week started with our next ob appointment.  Everything was fine and now we're going down to appointments every other week - I can't believe it!  I think that will really make time start to fly.  (Honestly, I can't believe that we're almost at 30 weeks - once the weeks til my due date are in the single digits I feel like I'll just blink and baby will be here!)  No more progress has been made on the nursery but we did get to Sherwin Williams and bought paint!  Our goal is for Jake to get the nursery painted sometime in week 29 - wish us luck!  We are planning on cloth diapering and ordered those a month or so ago.  There were some back-order issues, but they finally made it to our house!  They are supposed to be washed six times before baby wears them, so my plan is to start on those washings once the nursery is painted and the furniture all assembled - then I'll be able to put them away and be ready for their work to start!
I know I already said it, but I'm repeating myself - next week will be my week 30 bumpdate and I can hardly believe it!  For now, here's my week 29 bump :) 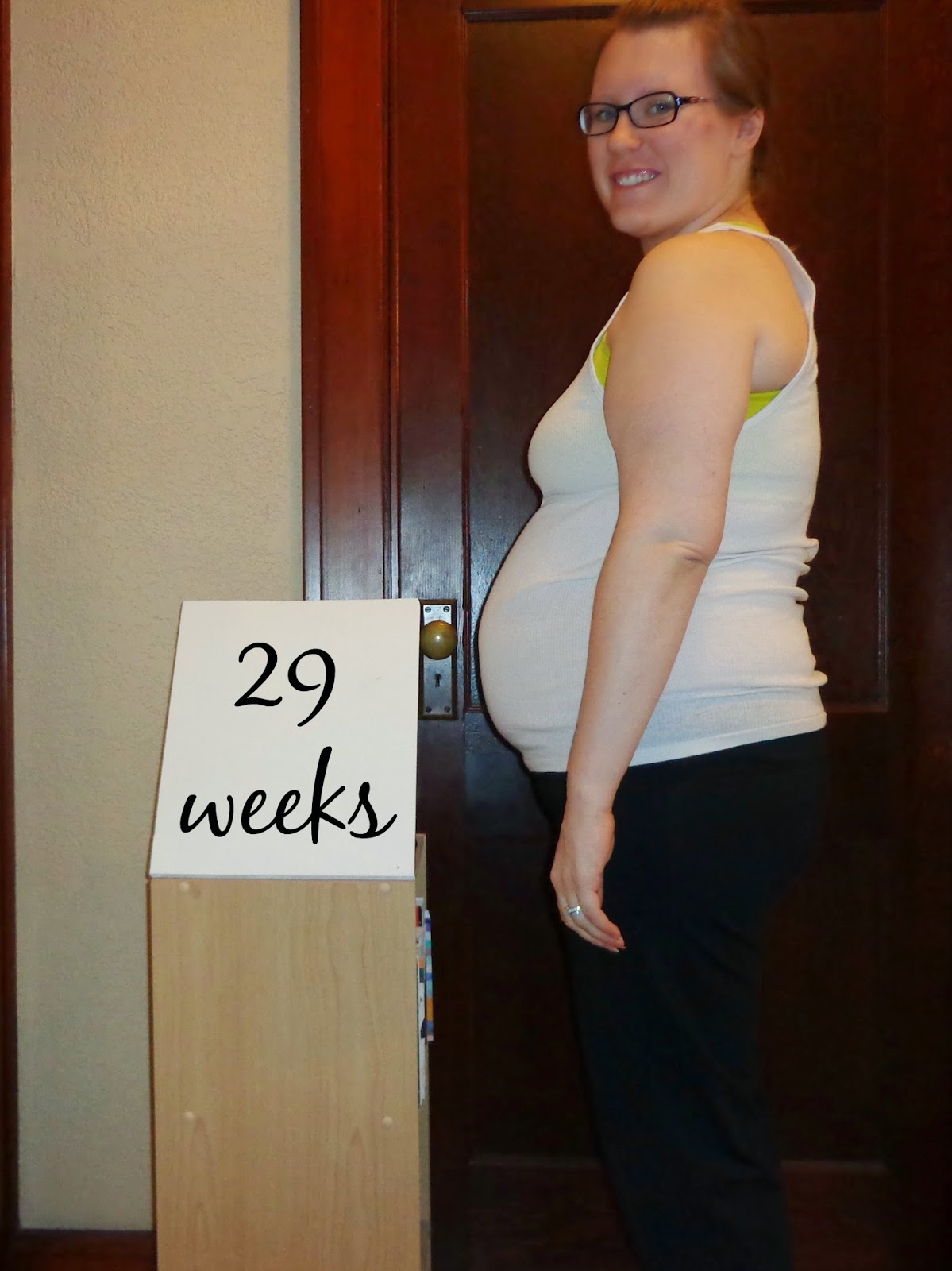 Weight: According to the OB's scale I have gained about 20 pounds.  Replacing the battery from my own scale is still on my to-do list, though, so I can track it on a more reliable scale.  With switching between two different ob office locations and, therefore, different scales, the doctor himself recommended going off the scale at home for a more reliable read.
Sickness: If fatigue counts as sickness, then I am there!  I don't think it does, though, so this is just the complaining of a pregnant lady :)  I did end up refilling my anti-nausea medicine because I had a couple bad days, but I have only needed to take a couple of them, so I am happy with that.  I have noticed that if I go a bit too long in between meals or snacks I start to get sick, so I try and avoid that!
Cravings: Nothing to speak of
Food Aversions: Nope!

Clothing fittings: I never thought I would be a big fan of maxi dresses but they are seriously the best invention ever!  I have two black and white dresses (one from my mom that was originally meant to be a swimsuit coverup, and one from my sister-in-law) and I wear them each once a week to work - I am sure my coworkers will start to get sick of them but I don't think I will be anytime soon!  Between the dresses and my maternity pants I have been feeling very comfortable lately :)


Sleep: While at Babies r' Us doing the registry, I saw one of those pregnancy pillows (the ones that look like a huge upside-down U) and Jake insisted that we splurge on it.  (We had just left Fleet Farm where he got TWO new pairs of boots, so he figures it was only fair that I get something I wanted, too).  It was a bit on the spendy side, but I can say without a doubt that it is some of the best money we have ever spent.  The fort of pillows is GONE from the bed and I can't remember sleeping better at any point in this pregnancy than I do now.  I still wake up several times to use the bathroom, but it has been easier to fall asleep and stay asleep than it had been - I'm a big fan!
Movement: You betcha!  The movements have changed a bit, though.  There are fewer noticeable kicks and more prolonged movements - less thuds and more rolls, I guess you could say.  Feeling the movements and seeing by belly react is still one of my favorite things!
Emotions:  I am proud to say that I didn't have any breakdowns the past two weeks!  Maybe I'm too tired to be able to handle it??
Workouts: I'll be honest - these past couple weeks have been not-so-great in the workout department.  The fatigue has made it such a struggle to do anything outside of going to work and doing the bare minimum of housework I can justify.  I'm hoping I start to feel a bit more like myself and less like a zombie in the next couple weeks!
Posted by Unknown at 6:00 AM
Labels: Pregnancy

It's very cool you're doing this. It will be fun to have all these memories down the road.