Holy Hannah how is has are we already at 21 weeks??  Last week I was celebrating being halfway through the pregnancy- and now we're officially a week beyond even that!  This past week has been, in a word, busy!!!  On Monday our very first 'baby-inspired' shopping spree became a reality when our new furniture was delivered!  After finding out we were expecting I decided very quickly that the old sofa and loveseat had served their purpose and it was time for us to upgrade.  We are both so glad to have made this decision!  I absolutely am in love with our new furniture and can't wait to have the little one home with us to enjoy it as well! 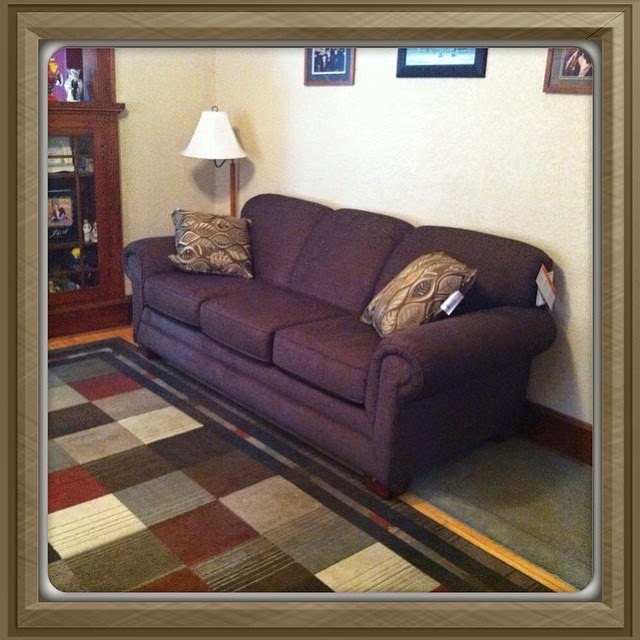 This is our new sofa (and pillows!) in all its glory!  I took a long lunch on Monday, as the estimated delivery time was between 11 and 1.  They showed up well within that time frame and moved it all in for me - I was pleased as punch!  Luckily, our old furniture also found a new home - without even having to put it on the front curb!  A woman I work with recently purchased new land in northern Minnesota, and she'll be using our furniture in one of her new living rooms - a perfect fit!

I had a bad morning on Wednesday, but beyond that I have been feeling pretty healthy everyday - what a blessing that is!  I still have nights where all I want to do is fall asleep at 830, but even those seem to be less frequent than they once were.

Friday Jake and I had a mini date night at a local state park.  It was great!  After work we headed south of Mankato to Minneopa State Park, had a picnic dinner and then walked around to see the falls and the river.  We did this same date night last year in the fall and the waterfalls were barely trickling - it had simply been so dry that there wasn't enough water to fall!  This year, though, the water was absolutely rushing!  It was really cool to see the difference between the two years.  The water was shockingly green, too - it reminded me of St. Patrick's Day in Chicago with the river turned green!  This was all natural, though, of course :) 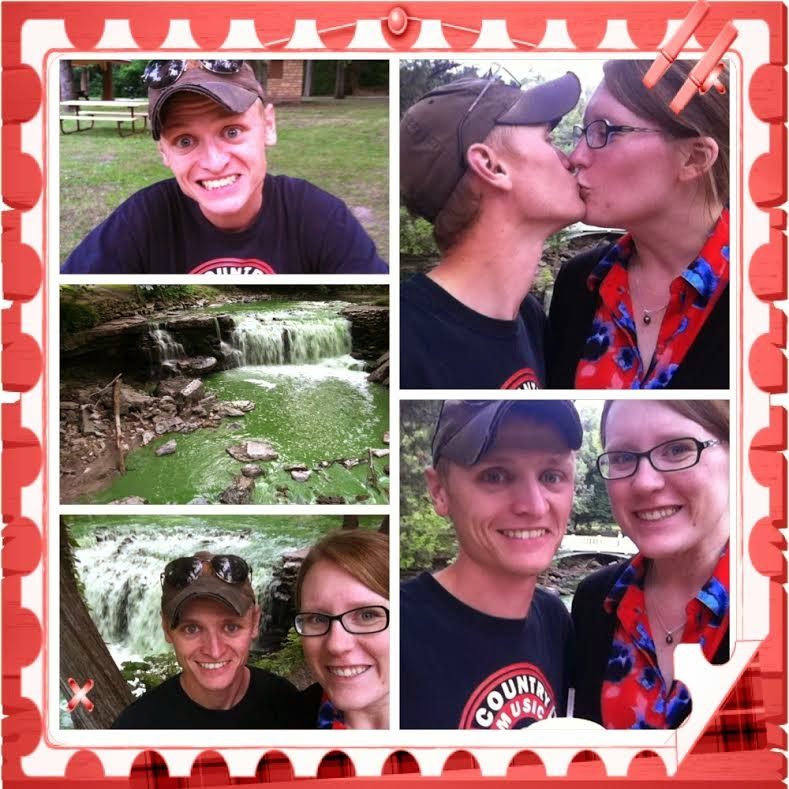 It's strange to think that last year when we went we had no immediate plans to start a family.  This year, we obviously are well in to the journey!  Next year we will have to make sure to go and bring the little one along!  Three years with three entirely different family situations - pretty cool!

Saturday I did a bunch of stuff around the house - but that's for next week's post ;)  For now, here's my week 21 baby bump picture! 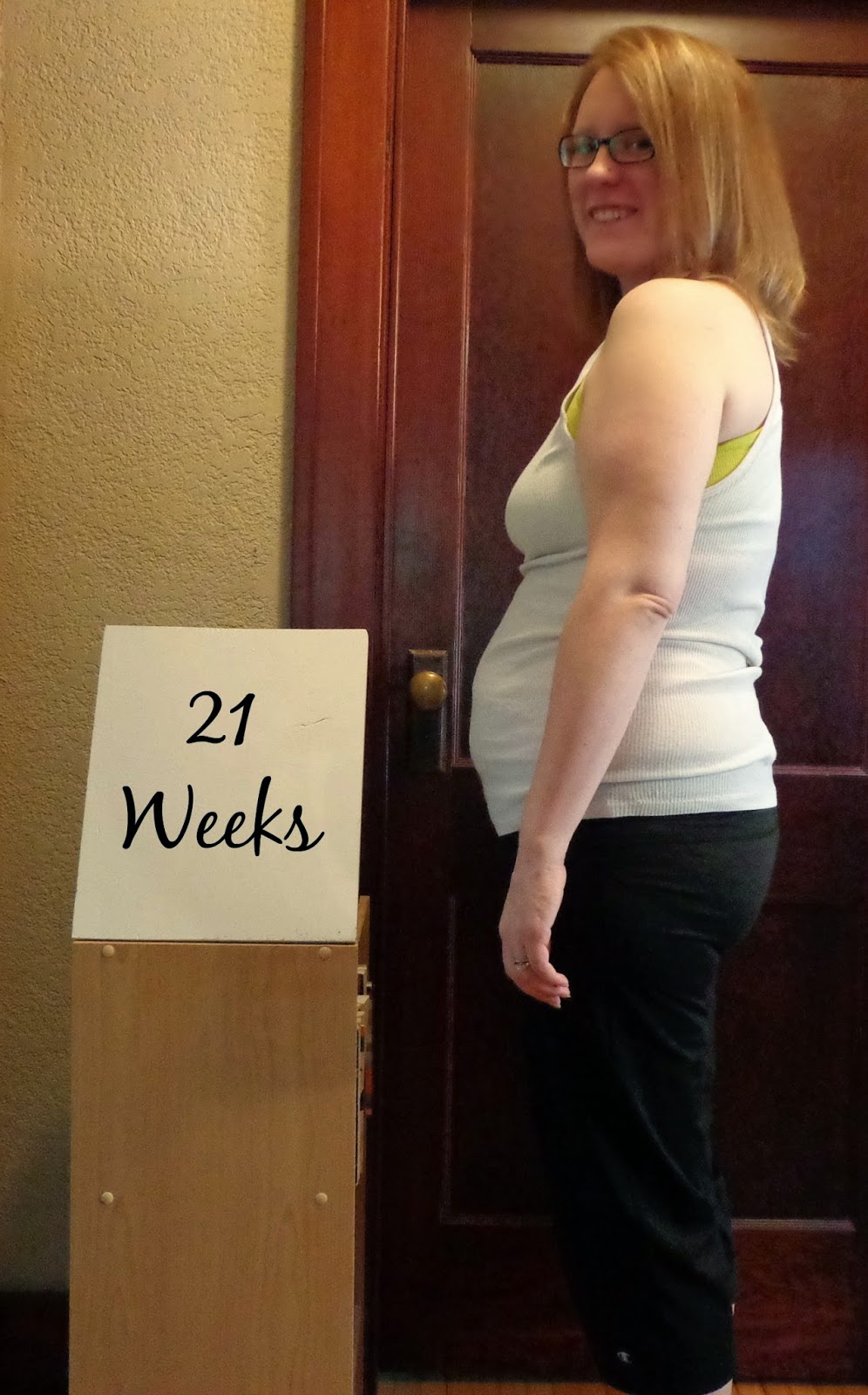 Sickness: Horrible morning sickness on Wednesday, but other than that I've been great!  I woke up feeling super dizzy, which could be attributed to the early dinner I had on Tuesday.  I went a long time without eating, which can definitely screw you up a bit!  Breakfast on Wednesday didn't stay down, but I was able to rest a bit and go into work for a couple hours at the end of the day at least!

Cravings: Last week it was blueberry muffins, so I had those throughout this week, but beyond that I didn't have any cravings!

Food Aversions: Nothing new this week!

Clothing fittings: I've been wearing the heck out of the clothes I bought last week, but I'm also still able to fit into the majority of my pre-pregnancy clothes so I have been alright on this front.  Black pants?  I still hate them (and probably always will!)

Sleep: Sleeping has been getting better, but it's still not great.  I have essentially created a fort of pillows on our bed - one pillow under my butt, one between my legs and three layered behind my head.  It's an improvement!  I've heard a lot about these pregnancy pillows - has anyone ever tried them?

Movement: I'm still fairly convinced that the *pops* I've been feeling are, in fact, the baby, but that could just be me wanting it to be true ;)  I've definitely noticed that they happen more frequently when I'm laying down and calm - which would make sense, since that would be the easiest time to feel them.  We go in for an ultrasound on Tuesday so we'll see how much movin' & shakin' the baby is doing then!

Emotions:  I've been pretty even-tempered this week for the most part and I love it!

Workouts: Piyo has been absolutely incredible to have throughout this week.  My shoulders, upper back and lower back have been so tight and sore, and being able to workout with Piyo has been awesome.  I love the stretching that I have been able to get out of the workouts - it's a huge help!!

Next week's bump date will be pretty darn exciting for me!  Changes to the nursery (a nursery! In my house! I love it!!) as well as ultrasound pictures!!  Until then,