Does anyone else think it's kind of strange for St Patrick's Day to be on a Monday?  I realize that it is not one of those holidays that always falls on a specific day of the week, but it really just seems like it should fall on the weekend.  I am about 0% Irish but I am still a fan of the festivities that surround the holiday - who couldn't be?

I have had a couple epic St Patrick's Days in my past but this year it's going to be a little bit different!  This past August I decided to go for a year without drinking alcohol, so this year my St Patrick's Day will include no whiskey, Guinness or any other type of beer.  (I will admit, it will be a bi strange to not partake in any alcohol consumption in celebration of the holiday, but I am looking forward to remembering the whole night!)
In honor of past St Patrick's Days, I thought I'd go on a little walk down memory lane to some of my most memorable celebrations! 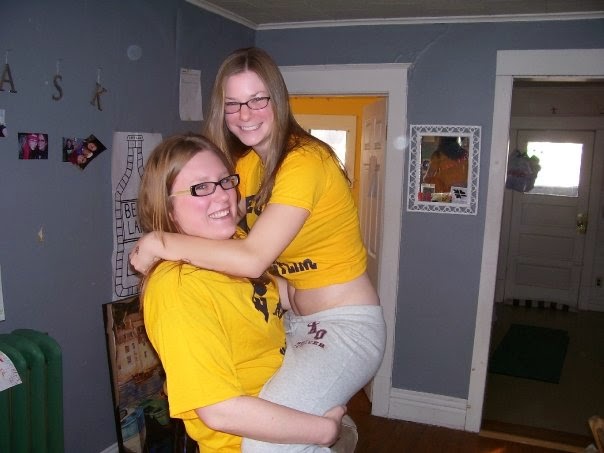 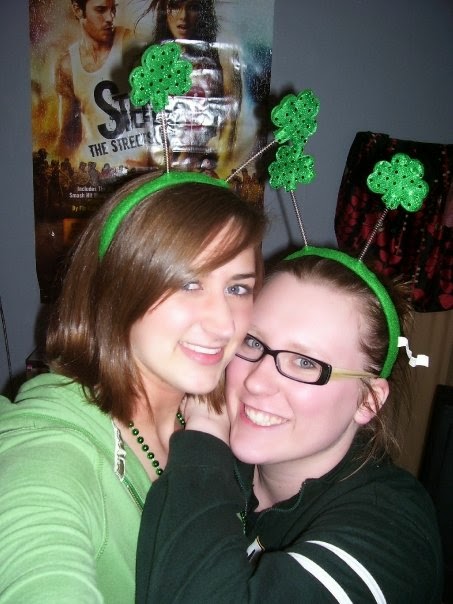 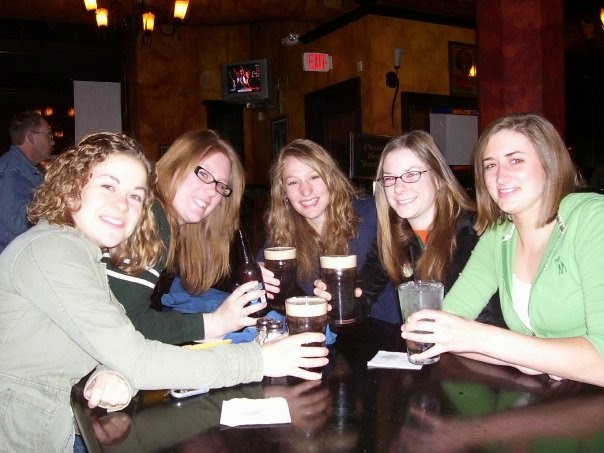 5 years ago (I can't believe it's been that long!) I was a senior in college and celebrating my last college St Patrick's Day!  I started the day with my favorite girlfriends, beers and eggs.  It was a great way to start the day!  A bit later in the day one of my roommates and I got a ride to school with a fellow student and we raided some extra tshirts he had from a wrestling team he coached.  (Surprisingly enough, I am wearing that same exact yellow shirt as I write this post!  The neck has been cut out, the writing had faded to almost nothing and the shirt is definitely thinner and more stretched out than it was - but it's comfy!)  We spent the rest of the night playing beer pong, (with beer in the cups, naturally.  Who wants to clean up that beer mess?) avoiding homework and discusing whether we'd actually make it to class in the morning.  I have no recollection if we made it there or not - but I do know that those shamrock ears were pretty awesome!

This one, I'll admit, is too bad for pictures.  This was during my semester abroad and two of my friends and I decided to visit other students who were studying in Ireland.  We spent a week exploring Scotland and Ireland and it was an incredible way to spend St Patrick's Day - I am so glad to have had the chance to be there for it!  Although we weren't actually in Ireland, I figure we were close enough to get a pretty good indication of what it might be like :)

Our St Patrick's Day included the following:
- Going to Loch Ness in the morning
- Getting back to the hostel in time to get ready, split some beers and head downtown
- Carry said beers around while we waited for the bars to open
- Go to one bar for the majority of the evening - we got to be a part of an Irish dance crowd - they do things I couldn't do to save my life!
- Meet an English man wearing a Mexican sombrero while drinking an Irish beer.  He was a man of many places!
- Get yelled at by the bouncers at the next bar that we would simply not make it in because they were too crowded so it was time for us to go
- Make our way back to our hostel where we continued to dance and drink.
- The next morning while one of us nursed a hangover (not me) the other two of us decided it would be a great idea to go wandering around downtown looking for a haircut and food.  This ended up being a much bigger ordeal that we planned for.  But, at the end of the day, it was worth the endless stories and jokes we have from that day :)

This St Patrick's Day will be quite a bit different!  On Monday I will be going to work - woot woot!  This weekend I will be finishing my second to last week of Focus T25 Beta, going to a book-buying party and then book club on Saturday morning and then hosting my parents for dinner!  It will be quite tame but quite lovely!

What are your plans for St Patrick's Day?  Will they be mellow or crazy?