Okay – seriously – where did the last week go?!  I feel like I just barely got last Monday’s alcohol update posted and now here I am doing another one!!!

I am happy to report that I have made it another week – and seeing as how last week was my 21st week, I’m probably not going to surprise any of you by saying that this week’s motto is from none other than Taylor Swift (or, as Jake’s niece used to call her, ‘Traylor Slift’)!!  Haha pretty cute!  And you’d better believe that if Jake ever mentions Ms. Swift she is always referred to as Traylor Slift.  Every. Single. Time.

Anywho…now that I have us completely off topic, let’s get back to it, shall we??  The last week has been once again pretty simple to abstain from alcohol.  With the winter being in full-force here in Minnesota I have been chilled to the bones and any type of cold beverage just does not sound appetizing to me at all!  Now if I had been laid out on a beach in Mexico this past week it might have been MUCH more difficult to pass up the temptation of a beer.
But seeing as how I don’t have any beach plans in my immediate future I’m not too concerned!  I have had a lot of fun sticking to my FocusT25 workout plan and seeing the numbers on the scale drop this week – I had no desire to add alcohol into the mix and test whether the numbers would jump up again!  There were several weeks there where I was craving a glass of champagne like a crazy person but I can happily say that I have gotten past it and now there’s nothing specifically sticking out in my head as something I want to order up and sip on! 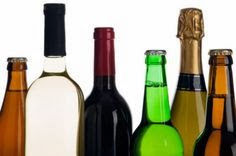 They say that it takes 21 days to create a habit – 21 days of working out, eating breakfast, drinking more water, etc.  But as anyone ever heard how many days it takes to break a habit?  I’m going to take a guess that five months without something pretty much means the habit has been broken – I have gone through weddings, bachelorette parties, dinners out, New Years Eve and holidays without cracking and taking a sip.
I find myself curious if I will have any urge to drink again once the year is officially up and I could drink if I wanted to without breaking my pact?
What do you think?  Have you ever given up alcohol?

That is so awesome girl! You are doing fantastic!