A dear friend and cousin-in-law (that's confusing - let's just say cousin!) recently commented on the fact that I'm kind of boring.  And, I'll admit it, she's right.  She wasn't being nearly as mean as it sounds though :)  What she was referencing was my taste in Shakeology!


I've shared before my journey that brought me to Shakeology, and the fact that I was pretty apprehensive about trying out a shake because I had never really drank shakes before so they seemed a bit too 'health nut' for me - but I knew that I needed help losing the weight that had crept up on me, so I signed up for my coach's challenge group and ordered Shakeology!  Little did I know that shortly thereafter I would fall in love with it, and I would be here almost a year later not only still drinking it, but helping other people try it as well!

But anywho, here I am!  And, as my cousin mentioned, I'm boring!  I'm a big fan of both chocolate and vanilla Shakeology and I never stray too far from my favorite recipes (Chocolate + water + ice or Vanilla + water + frozen berries.  See?  Boring!)

So in the spirit of the end-of-2013 Shakeology cleanse I am doing, I thought it was time to try some new things!  And I figured I might as well share my Shakeology journey here, too!  Today after doing Cardio Axe in Brazil Butt lift I made a Chocolate Banana Frozen shake - and I'm glad I did!! 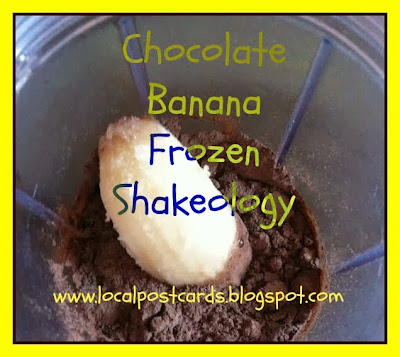 As you can see in the picture, I took a scoop of chocolate Shakeology, added about a cup of water and then half a frozen banana and then blended them up!  It ended up being a bit more watery than I would normally drink it, so I added 2 ice cubes and just a splash of water (I think having a bit of water with the ice helps it chop up better - I could definitely be wrong on this - but I'm just going to go with it :)

Yum yum yum!!  I am not really a banana fan so I wasn't sure I'd like this, but since tomorrow's my grocery shopping day my shelves are looking a bit bare, so the frozen bananas were my first experiment.  I just cut the banana right in half and then took the peel off.  I'm glad I stuck with half a banana instead of a full one - for me it had the perfect banana taste without being overpowering! 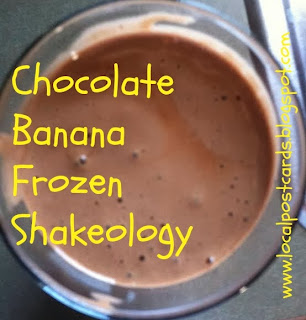 I'm going to keep a running tally of the new recipes I try over on my Shakeology page - check it out soon for more ideas for your Shakeology!  If you don't have Shakeology yet but want to try it out, shoot me an email at ashleykrek@gmail.com - I have Shakeology kits available and ready to ship out so you can see what it's all about!