Here we are, and I can officially say I have made it two weeks being liquor-less!  It still seems a bit strange to me that I am going for 52 weeks without any liquor, but I'm excited that I've made it this far and that it has been so easy!
Like week one, the week days from this week were pretty easy to not drink.  I was working, working out and watching Big Brother (this may make me a big nerd, but I'm ok with that!)  During the week I really just haven't found myself wanting a drink - which definitely makes it easy to not have one! 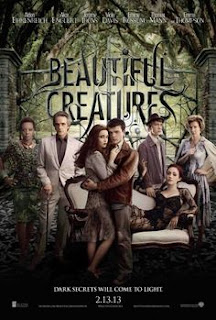 The weekend was a bit more difficult, but again, nothing that really tested me.  Saturday night was a date night for me and it was awesome!  We went to dinner and then came home and watched the movie Beautiful Creatures.  It's not something that Jake would normally be interested in, but we both ended up really enjoying it!
While we were at dinner, though, Jake ordered a beer and that was probably the biggest struggle I've had so far.  It's become a routine that when he orders a new beer I try a taste of it - so I was tempted to do the same again!  But I knew that it was a momentary thing, and I shut it down and stuck with my water.  I'm happy I did, too, cause here I am with two weeks behind me!
Sunday was a family birthday party and there was beer, wine, long islands and anything else I could want, but I stuck with water 100% and it didn't bother me at all.  It was awesome because a lot of people told me that they're proud of what I'm doing and the progress I've made, so hearing all those things made it really easy to stick with no liquor and even steer clear of the pop!

2 weeks in and I'm a happy liquor-free girl!  I hope you all had an awesome Labor Day!

Posted by Unknown at 6:24 PM
Labels: No Alcohol