My History with Alcohol

Some think it's an awesome idea, an awesome experiment.  They're curious to see how it goes and to follow along!
Some think it's crazy and that I'll never be able to do it - or they just question why would I ever choose to do it?
Some have a very small reaction - I don't drink a lot now, so what's the big deal?  They're right that I don't drink often anymore - I'm more likely to order water with dinner and I rarely make a drink while I'm sitting at the house watching a movie.

I'm not doing this because I believe I drink too much or too often, because I know that's not true.  I'm doing this because I truly want to test myself and push myself to do something that a lot of people define as "crazy".   I'm going to use this blog and my Facebook page, Fortitude Fitness, to share my story over the next year - as I tackle weddings, bachelorette parties, camping and the various stresses that are often met with "I need a drink".

I'd love to have you follow along with me - and if you want to test yourself and join along I'd love to share it with you!

For today, I wanted to put down into writing a bit of my history with alcohol so you all know where I'm coming from. 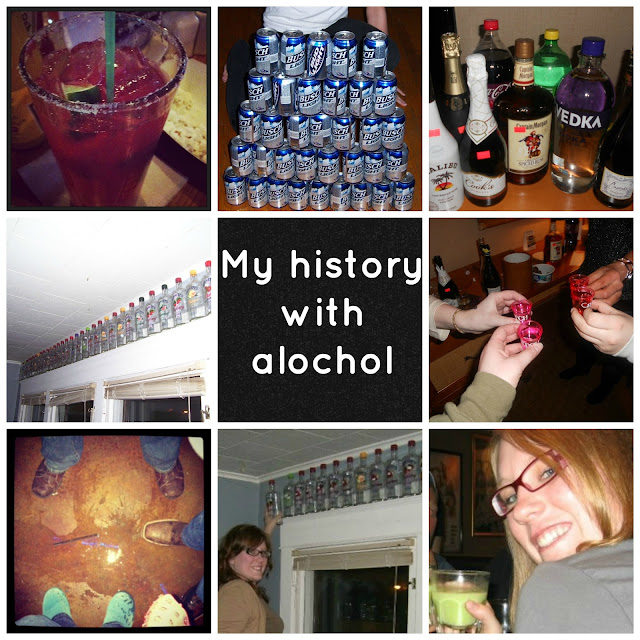 When I got to college I still didn't jump right into the drinking scene - for my whole first year I didn't touch a drop.  The last couple years I got introduced to vodka (Burnett's to be exact), beer and cheap wine - and I realized that I actually liked these things.  I had a lot of fun but I still was never a big party-goer.  9 times out of 10 it would be me plus a couple friends and we'd be playing beer pong or watching cheesy chick movies while drinking. We probably drank too much, too often, but we had a lot of fun and avoided a lot of trouble!

Sometimes we got a bit adventurous and would run to Yesterdog in Grand Rapids, Michigan, play Beer Olympics, get written up by RAs or accidentally-on purpose break down basement doors, but it was still not the crazy college party life that a lot of people have.  (Not to say that we don't have crazy stories to laugh about now - cause we definitely do!)

After college my drinking stayed similar to what it had been - though it did drop off in frequency by quite a bit.  (I'm still not sure how I was able to drink 6 nights a week my senior year and still graduate on time with 3 majors - if anyone can explain this to me, I'll be forever in your debt!)   If there was ever a time in my life where I actually "partied" in the normal sense of the word - actually going to parties - it was the couple of years after college.

Sometimes it would be in my home area, and sometimes it would be at what is now my house with my husband, but what was then my boyfriend's house with his roommate.  We would have crazy fun, but it's about this time that the dreaded hangovers started... and I was not a happy camper.  Somehow in college I had managed to avoided the hangover curse and could easy wake up for class and another night of drinking.  Not the case once I hit the big 2-4.

Really, it's when the hangovers started that I slowed my drinking down by a great deal.  Not necessarily because of the hangovers, but just because life had changed and so had I.  This is where I've been now for a couple years.  Every once in a while I'll go out but I don't drink a lot.  Sometimes, though, the vodka sevens go down pretty easily and I wake up in the morning with a pounding headache and a wasted day.  And I normally end up making macaroni and cheese - because really, what's better than mac n' cheese when you're hung over?  (Except for a cheeseburger, but there's no fast food burger joint in town and you'd better believe I'm not in any state to drive to the neighboring town to get one!)

Starting on Monday, though, I won't have any of these days for quite a while, though.  Sure, there will be days that are harder than others but if I can lose 50 pounds and keep it off, if I can get 3 majors in 4 years of college, if I can study abroad in the south of France where I knew no one, I can have a bit of self-control and stick to my goals!

Posted by Unknown at 6:58 PM
Labels: No Alcohol

You Rock Ashley. You have proven you can do anything you set your mind to. No good luck wishes since I know you will have no problems in meeting this goal.