How many times have we all been asked what our biggest fear is?  It's a question that gets asked so often that a lot of times we don't even have to think about our answer before we give it - spiders, heights, small spaces, failure.  Failure is one that is used a lot for applications, essays, or just if you want to sound really dedicated and motivated to do your best in life.  If you want to impress someone it's easy to say, "my biggest fear is failure" because that must mean that you don't fail very often, right?

I beg to differ.  I'm not saying that people aren't afraid to fail.  I think  most of us are.  We want to succeed, we want to do our best and we want to have other people notice it.  But, at the end of the day, I think more people are more afraid of success than they are of failing.  We try so hard until it hits a snag - and then we stop.  We throw our hands in the air and give up and say that because we stopped ourselves, we didn't really fail, so our fears weren't realized. 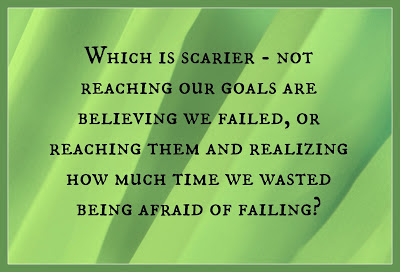 How often is it probably true, though, that if we had just pushed a little harder, given it just another couple tries, we would have succeeded?  That today we could say I DID THAT rather than just letting it drop to the wayside.  We stop our own progress because we know, somewhere deep down, that if we really tried and really pushed, we could do it.  We could succeed beyond what we can even imagine, and we'd amaze ourselves and everyone around us. 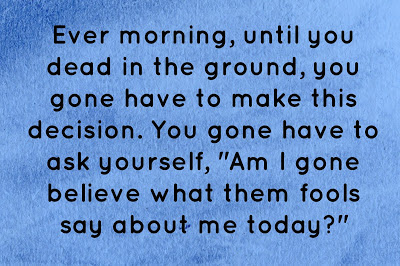 This quote is from the book The Help, and ever since I first read it it has stuck with me - I think we all have to stop believing what foolish people say about us - and we have to realize that sometimes WE are the foolish people saying things about OURSELVES!

We are all capable of doing so much more than we believe are can do.  Today I'm going to do my best in everything I do, and then I'm going to do a little bit better than my best - because I don't think we realize how good our best can really be :)

There are many things in my life from which I am always afraid and I am always trying to avoid from them. I am pretty sure by using these ideas we are able to come over our fear.

I am greatly impressed by your post. Keep writing such great posts. Tik Tok