The Girl Next Door

Friday night was spent in the company of my very favorite girl next door (no, not Holly or Kendra) but Bridget!  It started out as a puzzle and wine night (mainly because we didn't want to have to go out and do anything with the Minnesota winter being so damn cold).  After some wine was drank, however, we realized that the puzzle was just not going to happen.  So, we filled our new free time with more wine and gossip. 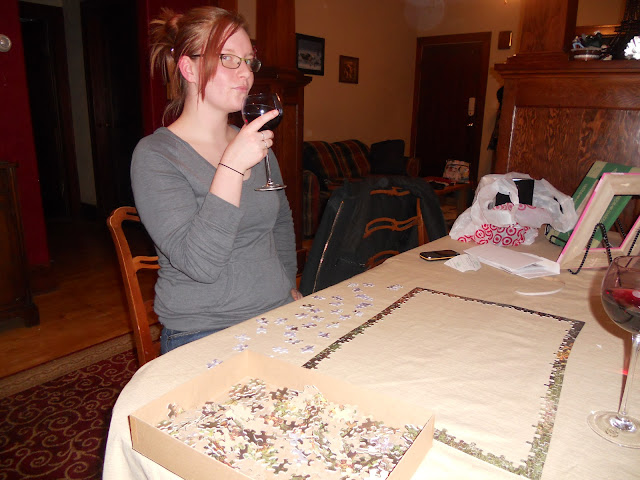 Love it and her.

At one point when she was over I wiped off the counter, and then we both went to town trying to get a stain off... it took much longer than I'd like to admit for us to realize that what we thought was a stain was, in fact, the light casting a reddish light onto my counter through the wine glass.  We felt dumb, and felt the only possible solution was to empty said wine glass- so that's what we did.  And then filled it.  And then emptied it again.  And so on... 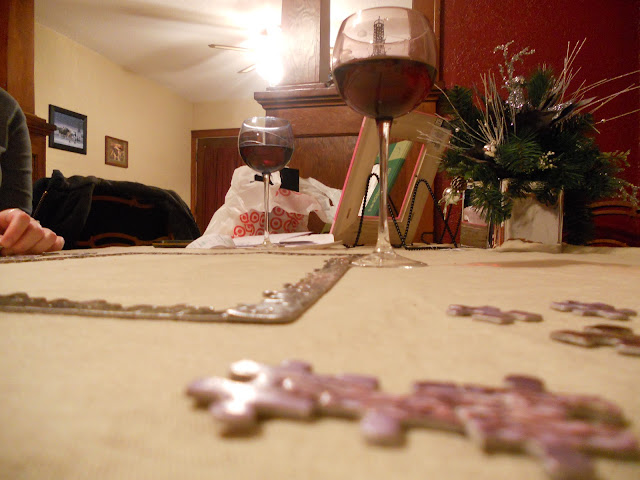 On Saturday hubby and I went to the house of two of our friends.  We had some lasagne and drinks.  I had gone grocery shopping earlier in the day in order to make the lasagne, and two pies that I'm bringing to Christmas Eve dinner tonight.  Naturally, when it came time to decide which type of pie to make, I chose the one that had the name of a liquor in it's name... Brandy Pear Pie!  So, after the grocery store I went to the liquor store- a beautiful place.  I nabbed their last bottle of apple brandy (I had never heard of it before, but I guess it's popular!)  The bottle was huge, when all I needed was a half cup for the pie.  So along with the lasagne, I brought over the apple brandy.  We found recipes on-line, and made up some drinks!  Because there were four of us, we pulled out the pitcher to mix them in.  Well, we failed to realize that the recipe was more geared to a giant shot than a full drink, so our pitcher looked like this... 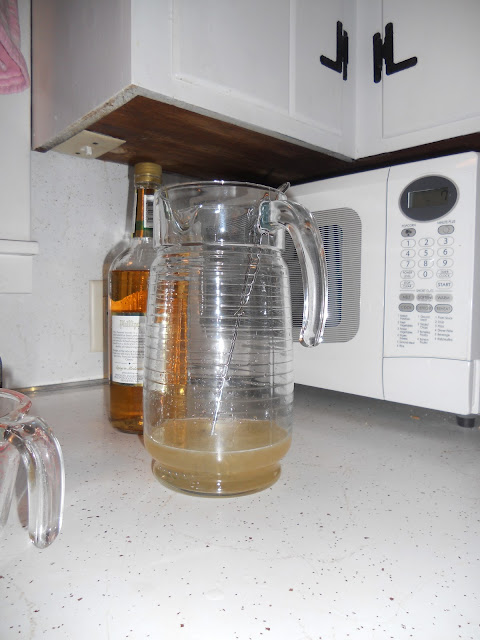 So, we just made three more batches and called it good :)  (And believe me, it was good!)

But between that and the stain/light on my counter, I had a dumb weekend!

Sunday was better, though.  Hubby and I exchanged presents and celebrated Christmas on Sunday because he has to work for twelve hours both today and tomorrow- I feel bad for him!  But, because he won't be around I'll be at my parent's house tonight and tomorrow morning.  He got me a Roku- has anyone heard of these things?  They connect directly to your tv and your wifi so you can stream Netflix, Pandora, Hulu Plus and other stuff on your tv.

So, after dinner we watched Breaking Bad.  Good stuff.

I hope everyone has a wonderful Christmas!!!
Posted by Unknown at 1:23 PM
Labels: Friends, Holidays, Idiocy, Liquor